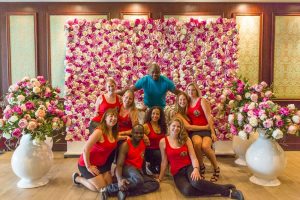 During the summer holidays of 1998, I visited my uncle who stayed for a year (for his doctoral research on deforestation in Africa) in the small northern port city in the Netherlands, by the name of Delfzijl. I immediately found a holiday job in a bar where African sailors gathered every weekend. At the time, my boss preferred sailors in his bar because they enabled us to make good sales. However, the local population, especially those from the Caribbean (Surinam, Curacao, Aruba, etc) felt that they were no longer welcome in the bar. In fact, the Africans arrived each evening with their own music and seized the bar, causing confrontations that required the intervention of local police each night. The solution to this conflict was sharing weekends so that each group determined the kind of music to play on alternating weekends. Expecting that he had found the solution, my boss created a problem that still bothers me to this day: dance and African music. During the African weekends, I took care of the bar and music. However, conflict soon arose unexpectedly between the African patrons. Africans would arrive in small groups to the bar and each group would give me songs to be played. The general rule is to feature music of all countries before returning to the first musical genre. Thus, they all agreed on genres like soukous, makossa and semba. However we were subjected to interminable discussions that ended in fights breaking out each night when it came to the beguine, the coladeira, social semba, rumba or the kizomba. To refer only to the kizomba here, some call kizomba African zouk, others African tango or even semba zouk to explain that these genres had already been played. Some groups simply changed the origins of the dance to gain favor and mislead other groups. In order to argue that the music of a particular group had already been played several times, the historical facts were put on the table by the protagonists. So, I identified myself as ignorant of my own culture, but by the end of the holiday, I had decided to learn more about African culture. Thus, I decided upon my course of study. First, the African culture and communication. Later, African languages and cultures. Thirdly, African psycho-linguistics, and finally the sociology of law. Despite the fact that I teach forensic sociology to sociology, anthropology and French language students, lawyers, social workers and NGOs, and intervene in the courts in the Netherlands as a legal expert, I realized, following the discussions and the developments in the kizomba world, that I still had much to learn. Not only on the kizomba as a civilization (not culture), but also from the people who practice it, because without them there is no kizomba music or dance. Viva Kizomba Congress Amsterdam. This platform could release the kizomba of the culturalism that wanted to lock an entire civilization in its dogma and did not welcome its evolution.
E-mail: noel@vivakizomba.com